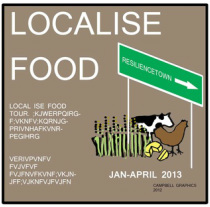 Now that the tour phase is finished and we are well into the production of video process. Editing up over 200 individual stories and producing a series of thought-provoking documentaries to be hosted in media-rich website.

Description
Our plan is showcase NZ models for a sustainable food future, through a series of professionally produced documentary videos, an interactive ‘transmedia’ web site, and later a television series or feature film.
We are doing this because we care deeply about a sustainable future for our country, the health of its citizens and the agricultural legacy handed on to future generations.
The educational video series with a ‘how to’ emphasis, aims to equip specific target audiences/interest groups to get into action by adapting an initiative which inspires them, to their own situation, community and area.
The feature film for a broad target audience, depicts a diverse range of initiatives selected from the video series. Its intended outcome is to motivate viewers to make some shift towards producing and consuming food locally, starting with their household and within their own neighbourhood.
The Institute of Earthcare Education Aotearoa, which pioneered this initiative, currently has 215 initiatives documented during its recent ‘Localising Food’ tour of Aotearoa/New Zealand.  It will be edited into twelve documentaries of thirty minute documentaries, under ten main themes.  Three primary sustainability criteria plus a range of secondary sustainability criteria where used to select candidates for filming (see 'Video Categories & Criteria' document).  Many of the initiatives we have captured are humble yet powerful models, unknown beyond their locality, whilst others have international acclaim.


Completion
The goal is to complete the Video Documentary 10-part Series and Transmedia Website by end June 2014.   Distribution would aim to specifically targeted viewers immediately after the completion date of each video.  We intend to assemble the whole series as a complete package in July 2014, with a major marketing push in August 2014, followed by a nation-wide launch of the series (accompanied by a complimentary packets of vege seed ), on the first official day of Spring 2014, Sept 1st.

Sponsorship and Post-Initiative Reporting
The series will be produced by the Institute for Earthcare Education Aotearoa, which is a Charitable Trust, so all donations made to this initiative are tax deductible. (request receipt) We plan to seek sponsorship for each specific video, together with its Trans-media Web development.  Sponsors will be credited at the beginning and end of that documentary with their names and logos.  Post-Initiative reports to sponsors be delivered on 31 July, 2014, just after the whole series is completed.

The kind support of many individuals and organisations has allowed us to build a great crew and start the story editing process. More examples will be popping up on this site in the weeks ahead. However with over 220 amazing stories to share and several thought provoking feature length documentaries to produce we need your support to continue the creation process.

Our vision is to create a powerful media-rich website to host all the video based stories, documentary material, practical guides and other resources that can be accessed at no-cost to the end-user That is why we need your contribution, no matter how small or big, to flip the conventional model and allow Localising Food to grow here in Aotearoa, New Zealand and around the world.

Together we can make this happen and build a food resilience and community with inspiring stories and practical solutions.

How to Make a Donation

You can donate directly for this initiative to Earthcare Education Aotearoa which is a registered Charitable Trust.
Contact us at localisefood@gmail.com